This time last week , it looked like this year’s coolest Scottish Festival, Audio Soup, had fallen victim to the rather dodgy summer weather we’d all been suffering north of the wall. One of the sound systems had just arrived & were unloading their gear when all of a sudden, in one symbiotic pulsing organism, everything on site was suddenly being lifted up & ferried over the wall to the adjoining field. It was all hands on deck as the river that cuts through the site had burst its bank & folk like the indomitable Bob Todd were literally waist-high in a flash flood of Biblical proportions. Half an hour later, the waters were already subsiding &, two days later – on the Friday – all that the first punters to arrive at the festival knew about it were the slightly soggy grass-ways. It was game on for the two Mumble reporters in the Soup (Bobsi & Spud) & all the other revelers & performers which make the place & the party so special.

SPUD – Welcome to the smallest, best, diverse and biggest-hearted festival in Scotland.  Audio Soup has increased in popularity and grown into one of the best loved festivals over the last few years. Situated near Cranshaws in a valley surrounded by rolling green hills, Audio Soup offers a wide variety of entertainment.  With music, arts, crafts and a well designed layout, Soupers can enjoy a weekend off continuous dance and deep felt vibes, released from all who have attended.  What must also be highlighted is that Audio Soup offers up not only music but a Kids Area, Massage, Steam Rooms, Local food stalls, Asian Clothes stalls and for those who choose to ramble the hills, great views of the site and countryside. Its just heavenly.. Perfect !!!!. 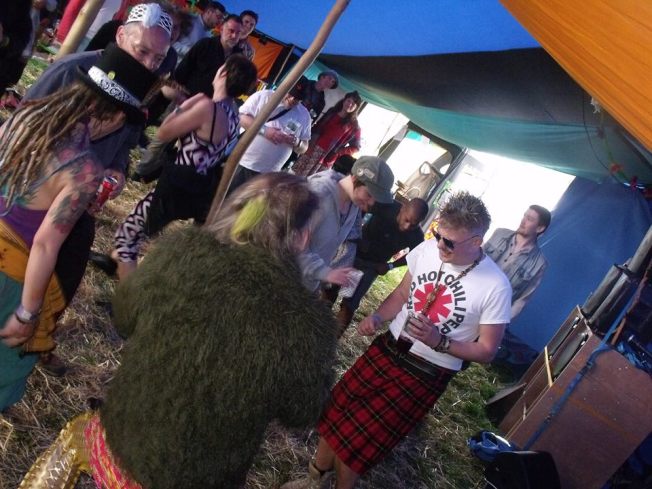 BOBSI – I got picked up by Saxy Bill, the newest member of Tinky Disco.  I sat in the back of the car listening to the lead vocalist, Mike, chat to Bill about studio sessions, singing jazz and blues and learning different instruments. As a keen singer and dancer myself, I was in my element soaking up the reverberations of two creative minds revelling in their passions. Tents pitched, midges out, a few beers had been sunk and the festival slaver was in full swing. Tiny Disco were playing at 9.30pm and they brought in a nice crowd to the Beetroot Cafe. I saw the Victor Pope Band afterwards and thoroughly enjoyed dancing to Steve’s intellectual lyrics; a mixture of food for thought and complete hilarity.  The Otherwhere tent brought some brilliant house, techno beats over the weekend. I particularly enjoyed the Samedia Sheeban session.

SPUD – With Friday night thoroughly underway, I managed  captured the set from Edinburgh band Tinky Disco with the infamous Mike Daniel from Groove Armada on lead vocals.  Currently working on their first album in the studio, Tinky were here to entertain us, and that they certainly did, with great lyrics and songs, they released an energy that captivated the audience, who buy now were grinding the dance floor into pulp.   With so much going on and so much to see I found myself darting around (happily) from tent to tent and being totally intoxicated by all the wonderfully conversations and chats I had with the artists.   Coming across the main stage I caught the set by King Lagoons Flying Swordfish Band.  With costumes from outer space and a quirky futuristic sound, this was a fun loving show full of deep bass and high cranked guitar sounds.  Loved it !!!

BOBSI – The crew put on an amazing festival and worked really hard to pull everything together. It felt like a low security event because there was a really good crowd of punters present, so no nonsense kicked off, that I was aware off.  Apart from one girl getting too wasted and one guy being asked to leave cause he was a bit shouty and rude. But you know, a two to 1,500 ratio is amazing. It is so refreshing to be at a festival like this. Trouble, is something that needs to stay far away from this kind of environment, and I hope that new people attending this type of event, can keep to the general coolness of the vibe and not stand out like a T in the Parker. It would be nice to slowly train T in The Parkers to behave in this way eventually, but I guess we would all hope that by the time they reach Audio Soup, they already get it. 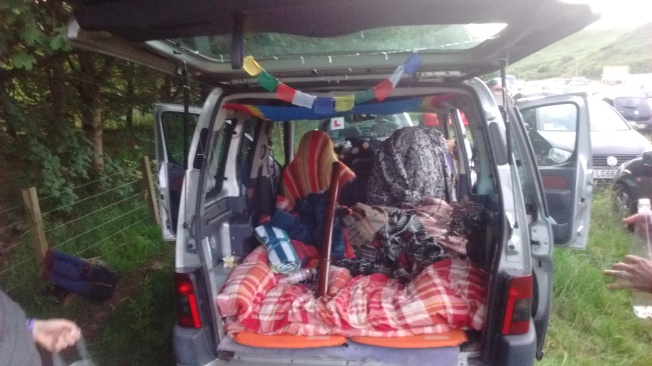 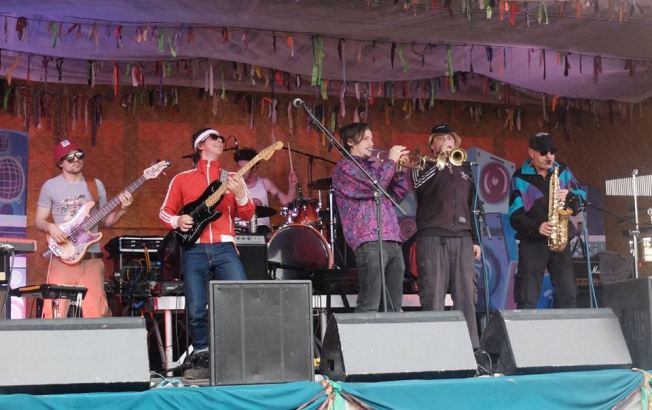 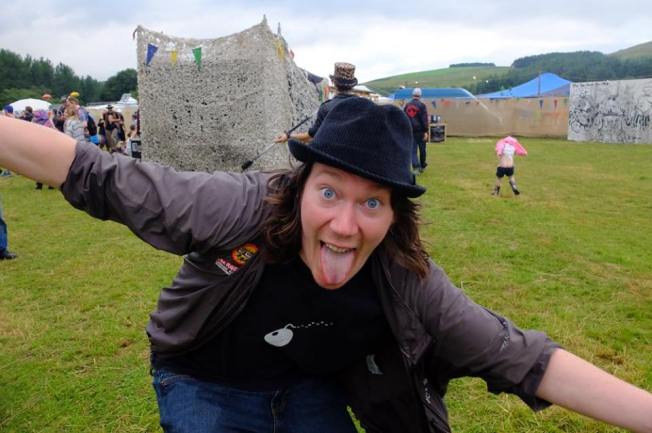 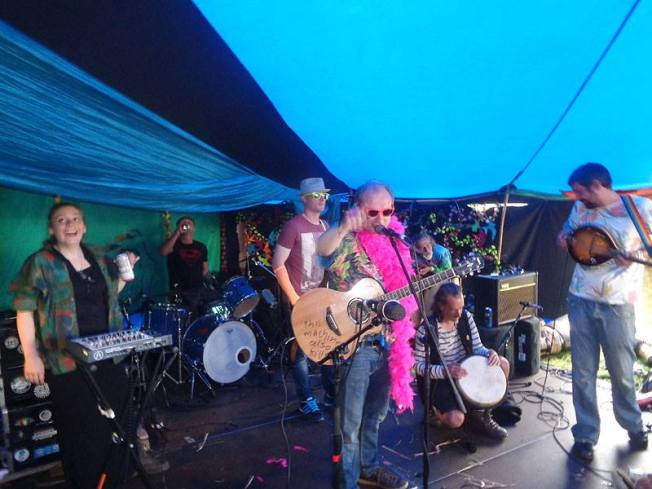 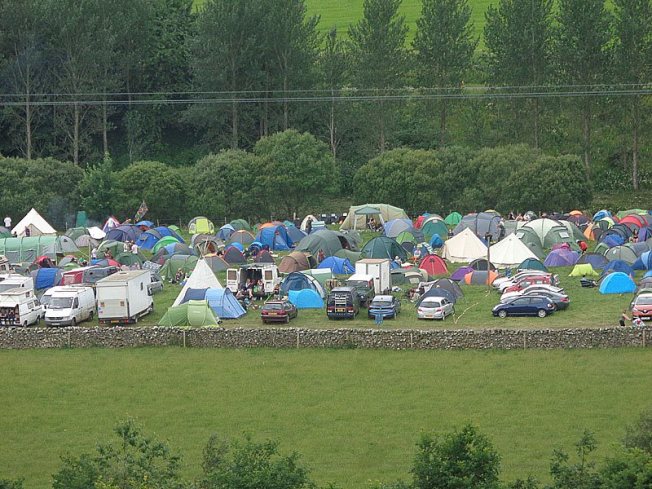 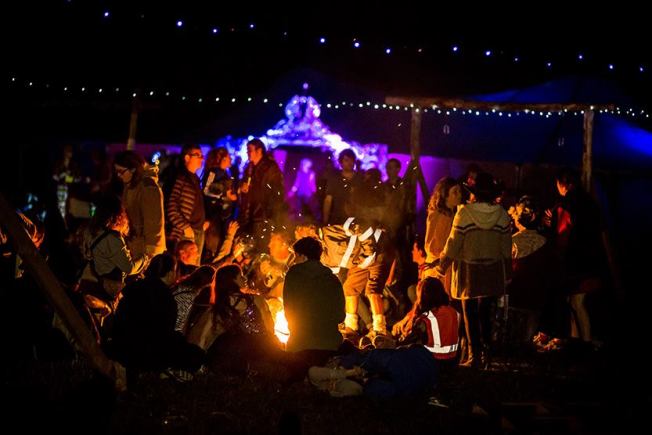 SPUD – With so many bands to see, like AC Red , The Girobabies, Nipples from Venus, Bombskare, Roots System, Sea Bass Kid, Urban Folk Band, Father Funk and much more, we were spoiled for choice.  Finding myself in Venue 42 on Saturday, I witnessed the set from 15 year old Morven.  With an acoustic guitar and a sweet soft soothing voice, Morven sung so beautifully it sent the crowd into a relaxed state of peace and near sleep.  What a wee gem in the making. I am sure Morven will turn up at many a festival over the forthcoming years.  Well done !!!!  With the Beetroot Tent hosting some great acts I managed to capture a 30 min onslaught from the Victor Pope Band. Another Edinburgh based band that has the genius Steve Vickers at the helm.  His infectious energy and mind blowing lyrics propel you into another dimension.  With quirky songs like “Susan Boyle Is Beautiful” and the thought provoking “Nice To Be Nice” their set was delivered and executed with emotion and heart.  Excellent is the word !!!! Walking around in the sun, it was a joy to see so many young kids with their families enjoying themselves, especially when throwing straw all over their parents. So nice to see. As the sun started to set I took myself to see Root System with MC Deta on vocals.  This reggae and dub outfit provided the up beat skanking sound which turned the crowd into a frenzy of dancing bees. 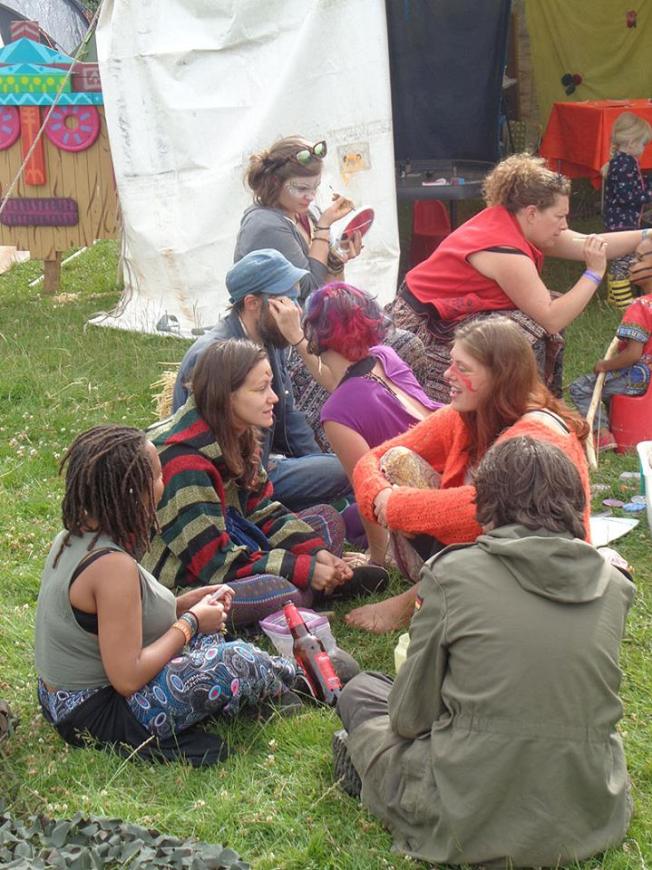 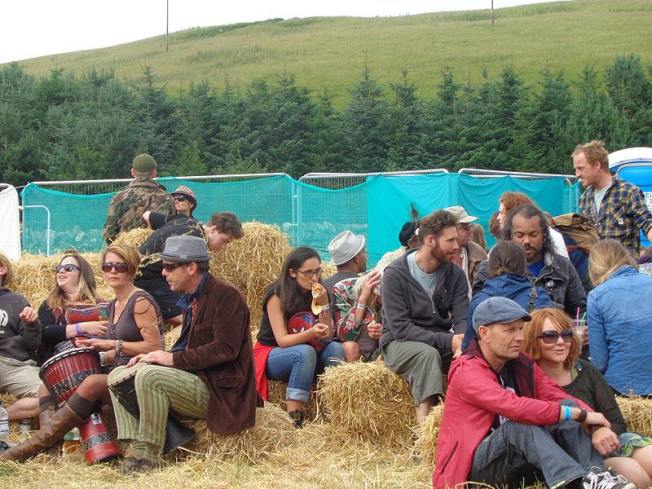 BOBSI – The camp site was great fun too, with random sessions popping up all over the shop. That is what I like most about the artists who perform at these gigs, they are totally non pretentious and just get involved with the normals. I never stand next to one and feel like I am not an equal. Even though, I don’t have a band, and I am not always known by the person. After all, people who avoid eye contact or don’t include you in a conversation just because you don’t have a connection to them, are just ignorant and rude. I really came across less of that kind of banter this weekend, than I have done for a very long time. Which was great! It let for lots of new friends to be made, which is the entire point of going to new places for me. One thing that got on my goat, is the dropping of litter. Adults, just flinging their shit away!  There were lots of recycling points with bins, scattered all over the venue, so this “bad” was pure and simply down to the extreme laziness of some of the punters.  As I mentioned to a few folk, the easiest way to clean up litter is to not drop it, so hopefully next year, at least some of the people whom return will have learned that one.

SPUD – After the magical line from Saturday, Sunday was lining up to be just as good.  Arriving at the main stage just in time to see MC Rolls take to the stage with the Urban Folk Band, it was a delight to see so many people with beer and bacon rolls jumping around like crickets on a hot day. True to their name the Urban Folk Band set the tone for a roller coaster ride of deep well crafted city beats.  A memorable time for all…   The Beetroot Tent was a wee gem of a place, hosting many of the diverse and unique bands around. Chatting to Ollie, Ben and James from “Irie Yo Yo”  earlier in the day I wandered into the Beetroot Tent to catch their set. With James on vocals any passer by would have heard a deep rooted reggae voice that would have drawn them in.  This reggae band with a brass section really has the makings of something special . With chucky, clicky guitars and brass instruments that melt your heart, I felt like I was in the Caribbean .  Nice and tight and well delivered.  It was a joy to watch and skank along too. 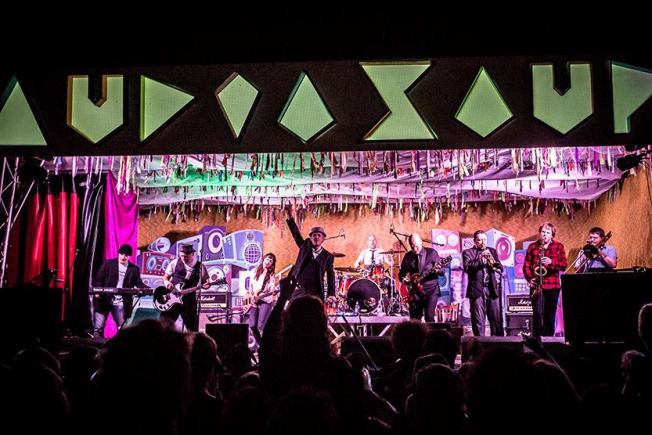 SPUD – With so many DJs to choose from there was a musical taste to suit all.  Two hours of Mumbo Jumbos ‘a well attended Edinburgh Club night’ was a smooth introduction into a night of dance and celebration . Funk, Soul, Disco and Urban Dance sent us all on our way.  Straight from Mumbo Jumbos was the long awaited sound of Samedia.   With their latino and jazzy sounds the tent was taking the full impact of the revelers energetic dance. The last band to take to the main stage need no introduction, so lets just say that they rocked the field and left the Soupers screaming for more.  That was the sound of the Ska band ‘Bombskare.’   The crew party started with the sounds of the 80s and 90s delivered by the one and only ‘Divine” a Fire Warden with a magical touch…   With a major thanks to Louise Hare and all the Audio Soup crew for putting together just not another festival but a real precious memory for all.

BOBSI – The Cackle Bar seemed to attract creative minds into synchronised shenanigans at various points throughout the entire weekend, as well as being the main host for the Crew Afterparty. The tent seemed to have a mind of its own and encouraged all sorts of interesting conversations and grown up games. Face painting, balloons and cocktails were just on the surface of the fun, which seemed scratching to get out from underneath. It harboured the Fairy Post Depot, where I learned you could write your favourite wish and stick it into the Communal Fairy Bam Pot, which would then be free for any other bam or pot head to read, and do something about if they so wished. And it had a lovely lounge area, for when watching dancing was more to taste than doing dancing. It was the perfect balance of everything you need at same stage, during a festival, or in fact, life! So it was to no surprise that I found myself bouncing back to this point at the most regular of instances during the course of the party. Cackle banter, so it was!

The final word should go to Scotland’s busiest funmaker, the never-weary Mark McGhee, who told the Mumble,

Just back from the best Audio Soup yet !!!

Shouts to all the organizers Louise, Ali, Adrian, Abi , Ricardo and all the many others who work so hard to make sure the good times flow. It was a pleasure for us to play the main stage and run the BoomBapSoupRoll Hip Hop tent all weekend

Shouts to all our helpers Sara, Lindsey, Nic, Jamie,Jonathon, Cee, Andy , Thomas, John and all the rest who made things happen and helped make everything run as smoothly as possible all day and night for 3 days in a field. So many talented artists gave their best ever performances. I was blown away by the skills on display and the respect and the gratitude all these talented folks showed to the good ship Audio Soup.  Big ups to tha boom,bap soup .. and roll on next year! 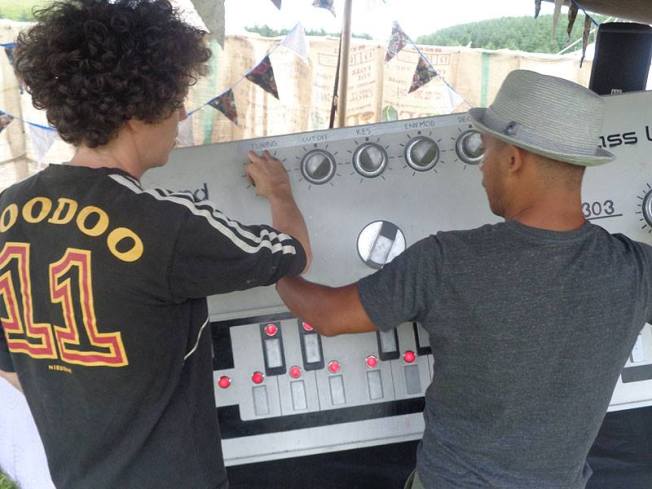