The festival season is fast approaching & the Mumble managed to catch a wee blether with one of the co-organisers of Party at the Palace, near Linlithgow in Scotland

Hello Peter, so where are you from & where are you at, geographically speaking?
I am from Glasgow originally and now living in Edinburgh

When did you first get into events?
My background is hotel management and this come with a huge amount of events work to a certain scale. I have always had a passion to organise large scale events and took the plunge 10 years ago to leave my hotel job to start my own company which was to organise events for clients and events I produce myself. I throve on it and really enjoy what I do.

Who inspires you musically?
You should be asking John (Richardson) this question – our tastes differ hugely! But from a Party at the Palace point of view – bands who know how to work a crowd, get them going and have them singing and dancing along! Bands like The Proclaimers and Paul Heaton and Jackie Abbot are huge favourites of mine!

What does Peter Ferguson like to do when he’s not organising kick-ass parties?
He is a huge lover of theatre and spending time with my family and friends. I love travelling and seeing what’s out there but more often or not I’ll be enjoying some lovely wine, great food with my best pals!

Where, when & how did the idea for Party in the Palace originate?
Back in late 2013, John called me up telling me he and some of the other local dads in Linlithgow had been chatting about how they could all make their fortune and were sharing ideas and John decided that putting on a music festival was the best idea! When he called, me I was having none of it to start with as I know how risky putting on an event of this size is – financially and logistically – but I saw the light and agreed it was a great idea! We are now in to year 5 and have not looked back – ok we have learned LOTS over the last five years but we are extremely proud of what we have achieved and the awards we have won too!

Can you describe your relationship with your co-organiser, John Richardson, in a single sentence?
John is a great guy – one of my best pals and we know how to work each other to put on great events! 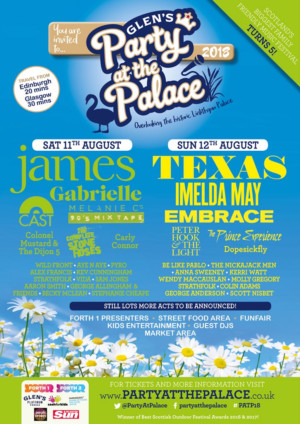 How is your working relationship with West Lothian council?
West Lothian council have been a great support to PATP, I think they were keen to see how year 1 went and if it would be a success and we are delighted to prove that it was and it’s a huge benefit to the WLC area both economically and putting the area on the map as a great go to destination. We are supported fully by the council in all departments which is great!.

The Party goes from strength. Did you ever foresee such popularity?
We had no idea how the event would be received – obviously in year 1 there was huge excitement locally with the prospect of some amazing bands coming to the town – we soon outgrew the venue and had to move across the loch so its fab to see that the demand for tickets is so high and people are now buying tickets before we event announce the line-up. We feel we are a go to event knowing that the weekend is fun regardless of the line-up. We are very family driven too which ticks many boxes for our customers.

We keep the bands very much on brand with the festival – those who will attract a family friendly crowd without being too retro. We want the audience to come for a good weekend and feel safe knowing the bands will bring like-minded people to come and enjoy.

How do you decide upon the acts?
We start looking at acts about a month after each event has finished – we are at the mercy of the bands touring schedules, availability & budgets. We keep the bands very much on brand with the festival – those who will attract a family friendly crowd without being too retro. We want the audience to come for a good weekend and feel safe knowing the bands will bring like-minded people to come and enjoy. Our bands have a good following and are popular with those we aim to attract.

Who have been your favourites in the past
I loved CHIC feat Nile Rodgers – what a party they put on and I think they surprised the audience in 2015 with how fantastic they are and all the hits they have! Bjorn Again we up there as a favourite – who doesn’t like ABBA?! Another favourite would be Simple Minds – what a production they put on!

What allowance do you make for local acts gracing the stage?
Three years ago, we introduced our Breakout Stage (second stage) to showcase local and upcoming bands – this stage has been really well received and draws a large crowd. We are always keen to promote local and upcoming bands as much as we can. As the festival grows its great opportunity to give these bands a nice platform to perform.

To someone who has never been to the Party, what have they got to expect?
They can expect a great family friendly and safe day out. Great music – excellent facilities for kids and a huge variety of food choices and drinks. With 3 stage, fun fair rides, kids activities, market stalls, VIP area, garden areas and much more – it is a great weekend!